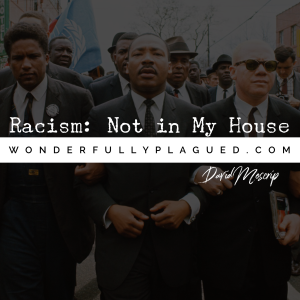 Every Martin Luther King, Jr. day, I try to make time to educate my children in some way about the struggle for racial equality in America. This morning, we watched a documentary about Martin Luther King, Jr. and the time in which he lived. Although many even today would try to write him off due to his admittedly deep personal flaws, King’s pursuit of racial justice and prophetic vision for that future cannot be denied. The America my kids live in and the views we hold as standard today are largely due to Dr. King’s refusal to sit down and shut up in the face of the societally acceptable injustices of his day.

Thankfully, it blows my children’s mind anytime they hear how people have been treated in the past, simply because of race… and that unenlightened fools believed it conscionable to benefit from the mistreatment of other humans.

Because of Dr. King’s dream of equality and his willingness to act, rather than it simply remaining a dream… I am able to say that I’m fortunate to be raising children who take pride in their own family and heritage, while not falling into the evil mindset that another’s heritage is somehow inferior. I am able to say that my children are not colorblind in a reverse racist form of disillusionment that all people are treated equally, but also do not see a difference or treat others as if their value is defined by skin color.

It would be blind and ignorant to state that we live in a post-racist America. Racial discrimination still widely exists today, but it will die a much needed death as more and more people join in refusing to perpetuate it and say, “It will not exist in my house.”