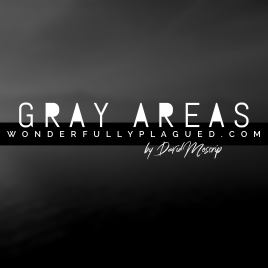 I really worry about Christians who have a black and white answer for every issue that arises. Sure, there are many aspects of life which are directly addressed in Scripture as being right or wrong, but there are also many that are not neatly defined.

Take the Rapture, for instance – just kidding that one is a myth contrived in the late 1850-1920’s timeframe in the USA. It makes a decent fiction series, but terrible doctrine… but, I digress…

There are many gray areas in Scripture about which many pastors/professors/theologians/denominations have chosen to take official positions, while there are none in Scripture. Examples of these “gray areas” would be: six-day creation, redemption after physical death, original sin, drinking, gambling, smoking, birth control, method of baptism, age of accountability, sexuality, eternality of hell, and political affiliation (this list is not exhaustive). While many would like to impose their personal conviction into any number of these issues, it is simply their own opinion and preference. Conflicting stances could be reached regarding these issues by those who hold a high view of Scripture.

It is completely condescending and indefensible to believe a person who does not believe that everything was created in a literal six days… or that a person who believes salvation is presented again after death… or that a person must be baptized through immersion versus sprinkling… is somehow a heretic, inferior, or doesn’t take the Bible seriously.

Jesus lived in the gray areas. He didn’t see them as gray, because he understood the intentions of God. He understood that God valued people above the precepts that were put in place to benefit people. Let’s remember that the Bible isn’t meant to be an all-encompassing reference guide for life. Its writers never even sought to make it such. Scripture is meant to record and remind us of God’s interaction with mankind.

While there are many things in Scripture that cannot be neatly packaged (without imposing our own will), there is one thing that is made abundantly clear:

Above all else, God desires us to love Him and everyone else as much we love ourselves (or more).

Love creates gray areas. It may be easy to hate the anonymous person who does something you don’t like… but it’s really hard to hate your friend who does the same.