If you wanted to become an Israelite in the Old Testament times (this was before the notion of a Jewish race), there was a ceremony that was meant to set males apart and designate them as part of the Israelite community: Circumcision. Bathing, physical training, and many other practices we now think of as private were experienced in a public setting, so it wasn’t really a matter of,

“I’ll show you mine, if you show me yours,” to distinguish their allegiance. Whether a man was circumcised was recognizable in normal daily activities. 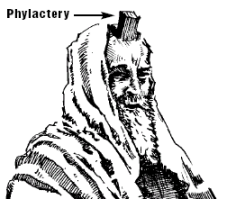 The Jewish religion made “phylacteries.” By the time of Jesus, the Jewish religion had formed, having been loosely based on the revelation given to Moses for the nation of Israel. If a faithful Jew in the first century wanted to be especially recognized as zealous, he would make leather boxes and place portions of the Torah inside, then strap it to his forehead. Aside from being an edgy fashion statement, the idea was to physically represent the admonition to “bind them [God’s commands] on your foreheads” (Deuteronomy 6:8).

Christians identify as such through baptism. They equate baptism as the physical ritual and reminder of affiliation with our faith. Baptism is gender neutral and not identified with a singular race, much like the equality of races and genders celebrated in the early church. “There is neither Jew nor Gentile, neither slave nor free, nor is there male and female, for you are all one in Christ Jesus” (Galatians 3:28). It is a symbol or act to which we can reference the moment of our salvation in Christ and affiliation with the universal Church.

However, symbols or traditions such as baptism, circumcision, and phylacteries are only meant to represent something greater that has taken place internally for the believer. When taken out of their context, or given greater emphasis, they become meaningless. If we begin to place our trust in a symbol of our faith, such as baptism, then it becomes worthless. Paul wrote some pretty harsh words to those who judged others based on adherence to the physical representations of their faith, such as circumcision. He essentially said that, as far as he was concerned, they could entirely cut off their own genitals. “I wish those who unsettle you would emasculate themselves!” (Galatians 5:12). Jesus also had harsh words to say about the hypocrisy of those who pretended to be spiritual by making their phylacteries more visible, “Everything they do is done for people to see: They make their phylacteries wide.” (Matthew 23:5).

It’s very difficult for me not to make jokes about how Jewish men liked to stand around and compare the size of their phylacteries. But I digress…

Both Paul and Jesus stated that the physical ritual is not what is important. The outward expression that is important is how faith expresses itself through love. “For in Christ Jesus neither circumcision nor uncircumcision counts for anything, but only faith working through love.” (Galatians 5:6). Church buildings, crosses, baptisms, etc., are all fine as representations of what we are living, but they are worthless and empty if they represent nothing.

It seems like churches will engage in endless debates and discussion about the parts of Christianity that, ultimately, just don’t really matter. Meanwhile, those outside the church see Christians as petty folks who like to get offended and argue. Why would anyone want to be a part of that?

Rather than being overly concerned with identification through rituals that are in and of themselves empty, perhaps the outward expression by which we should be recognized is our unending devotion to our faith being demonstrated through love.