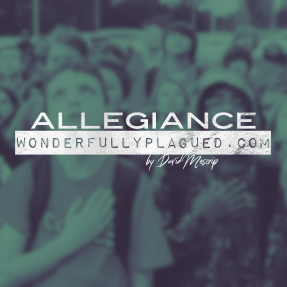 Last night, I couldn’t sleep. So, I turned on something I thought would bore me to sleep, The Bible miniseries that ran several years ago (turns out… it’s not as bad as I remember it). The problem is, I’m a theology student and get easily sucked into anything philosophical or religious. One scene that played out in the episode I selected was Jesus being questioned by the Pharisees about whether Jews under Roman rule should pay taxes or if it conflicted with their religion. Many have heard Jesus’ response that follows:

The impact of what Jesus said is often lost on the reader today, because we aren’t familiar with what would have been written on the denarius coin. One side would have had the profile of Caesar with words claiming his godhood; the other side would have had the image of the goddess Pax with the title, “High Priest.” When Jesus raised the coin and said, “…render to Caesar the things that are Caesar’s,” then later said, “…and to God the things that are God’s,” Jesus was refuting the notion that Caesar and Pax were gods who deserved loyalty. Jesus was telling the Jews that the image of Caesar on the coin meant that the money belonged to him, but their allegiance did not. Religious Jews at the time of Jesus would have recognized the concept of the image denoting ownership, from recounting the creation of mankind as being in the image of God. “So God created mankind in his own image.” (Genesis 2:27)

Those listening to Jesus’ response would have taken it to mean, “Follow the earthly law where it does not conflict with God, but your loyalty is not to Rome. Your entire being has the image of the True God imprinted upon it; that’s where your loyalty lies.”

There are Christians with whom we are united through our common belief in need around the world. Maybe we should be upset and outraged over our own negligence in caring for the people with whom our allegiance does lie, and a little less upset about who rises and falls in a governmental system to which our allegiance does not.