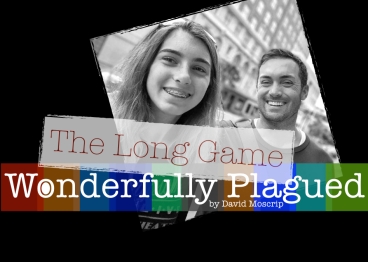 A conversation with my daughter, Alyson, sparked this post. She was talking to me about various issues going on in her life now that she’s a 16 year old in a college environment, and a lot of the interpersonal drama she sees playing out. We talked awhile about how to respond to people who gossip, demean, and undermine you.

I told her it’s more important to be patient and worry about playing the long game.

Those of us who live in the USA are surrounded by a culture that seeks to capitalize on the appeal of immediate gratification and satisfaction. It stems from an innate desire for justice. Regardless of our religious beliefs, or lack thereof, God has implanted in our nature a deep understanding that injustice is wrong, the desire for justice reveals a truth within us that there is a scenario in which everything can be made right. We long for this “made-rightedness.” At the core of those who truly seek to address issues such as the environment, prison reform, abortion, adoption, racial equality, and wealth disparity is an innate longing for that justness. Businesses and politicians expand their wealth and influence by offering immediate, but temporary, solutions. Credit cards are a perfect example of our propensity toward immediate satisfaction at the detriment of long-term success.

We sacrifice justice for selfishness.

The symptoms of this are played out in relationships between adults, but even more evidently in how we’ve begun training and raising our children. Rather than develop relationships with our children in which we train their thinking by letting them interact with our daily lives, we relegate them to daycare, children’s activities, digital content, and television. We appease them, punish them, and dispense of their presence in ways that gives us as parents the quietness or immediate behavior we desire from our children. The result? Many children are raised with zero life skills.

I’ve been reflecting a lot on the positive and negative aspects of my childhood. Mainly, I’ve been trying to think of the values instilled in me that I want to instill in my own children. It may sound cheesy, but I actually made a list. I believe in raising children in a “best friends” method. I’ve seen petty rant videos, social media posts, poorly thought out books, and even had direct comments made to me which disparage this, but… to be blunt… those people are wrong (and, frankly, kind of dumb).

The model we see in Scripture of teaching our children is one of being in relationship with them, not being authoritative toward them (yes, I’m firm with them… yes, they are disciplined for disobedience). I’ve seen Christian parents too often default to the anti-Christ realm of trying to pile guilt and shame upon their children as a method for extracting superficial, but “correct” behavior from them. This only results in developing little hypocrites, not godly humans who are able to handle experiences in life.

My conversation with my daughter ended with her having a greater understanding of why it’s important to act according to our values, regardless of what others say or do. We discussed how, even though we may make mistakes, the contrast of how we choose to live versus that of those who disparage will become more persuasive than any negative word that could possibly be said about us.

I would much rather have a conversation like that as “best friends,” than see her have to realize this value after being caught up in drama that she didn’t need to worry about.

We may have a desire to enact justice ourselves against those who wrong us, but that’s only playing the short game. Playing the long game of living according to our values and learning from our mistakes is better vindication than retaliation could ever produce.