There is a place in Lakeland, Florida, beside one of the lakes, that my children and I have always referred to as the Secret Hideout. My two sons regularly ask if we can go to the Secret Hideout for a while. We go there and throw rocks into the lake, play in the dirt, climb trees, or just sit and talk. Sometimes, we’ll find a coin or an old army toy in the dirt and make up stories and adventures about how those items came to be in that location. It’s not really a secret place (sometimes we have to make other people awkwardly uncomfortable enough that they leave, so we can be the only ones there), but we’re the only ones who know which location to which we’re referring when we talk about our Secret Hideout. 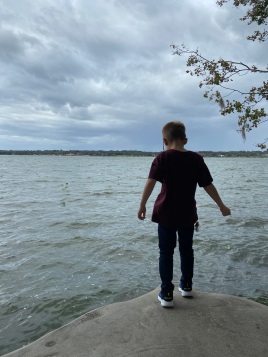 Last week, my son, William, and I were wandering around Lakeland for hours as we waited for my daughter to get off work. Will asked if we could visit the Secret Hideout, so we parked the car and walked the 1.5 miles it took to get there. Shortly after we got there, it started to rain. Will thought it was awesome; he was jumping around and yelling and having fun as we got soaked walking the 1.5 miles back to the car. My wife, Kacie, called me and said that her and my other son, Samuel, had just gotten hailed on as they were walking from the store to the car.

We really have little control over our lives. I’m not bringing this up to excuse the successes or failures of some due to laziness or poor decisions, but the only control we truly have is that of our response to events that transpire. Some try to elicit authority over others through intimidation, manipulation, guilt, or discrimination, but it’s only a temporary power that falls apart when the victim becomes enlightened as to their own power to walk away.

When Kacie told me that it had hailed as they were exiting the store, I began thinking about how we have a garage that our cars are usually in to keep them in good condition, about the fact that we make sure that they are waxed to protect them from the Florida sun, that I will spend hours detailing them so that us and the kids have clean cars to ride in, etc. However, that can all be undone by a random hailstorm that damages the cars (there was no damage, by the way). 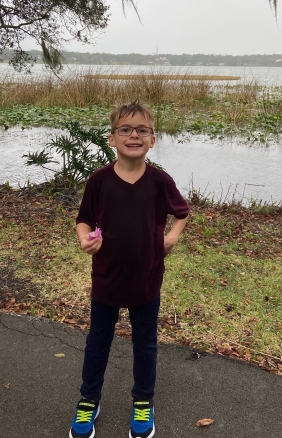 As I was walking back to the car through the rain with Will, I was really annoyed at first.  I knew we were going to be soaked for the next three hours before going back to our home in Tampa, but Will’s excitement to be out playing in the rain overwhelmed my negative attitude. I frustrated about getting soaked, while he was stopping in the rain to pick flowers for Kacie. We started laughing and having fun together. Rather than worrying about how uncomfortable we’d be over the next few hours, I was reminded to enjoy the moment. Will’s initial response to the situation over which we had no control was to enjoy it; mine was to be annoyed. As adults, we come to believe we have much more power than we actually have, but children have none, so they can only react to events.

Jesus spoke to this tendency we have to become anxious because of our false belief that we somehow have control in Matthew 6:31-34:

Therefore do not be anxious about tomorrow, for tomorrow will be anxious for itself. Sufficient for the day is its own trouble.” Matthew 6:31-34

William was enjoying being out in the rain with his dad. Soaked clothes and dented cars are things that don’t ultimately matter at all. Things will fall apart or break, but what matters is the way in which we respond to others throughout all of life’s events.

There is a reason that Christianity can be summed up in two relational characteristics: Love for God and Love for People. It is because those are the only two things that ultimately matter.