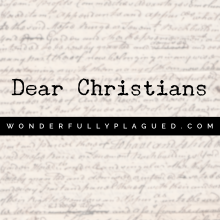 There’s an event recorded in John 8 about a woman being brought before Jesus who was caught sleeping with a married man. She was brought to stand before Jesus in the Temple (likely still naked in order to shame her). The religious leaders and attorneys said that the law commanded she be stoned, then asked Jesus what should be done.

Jesus replied that anyone without sin could feel free to stone her.

What if Jesus had stayed silent? Maybe he could have just shrugged and said, “A lot of women are caught in adultery.”

If he had done either, then she would have died that day.

The protests, rallies, and prayer events taking place around the country aren’t sin, but the refusal to acknowledge and address the reason they are taking place will only result in the continuation of the race-based discrimination and violence that takes place in our nation.

Our refusal to speak up or our decision to trivialize the very real experience our neighbors, communities, and citizens have endured does not place anyone on a moral high ground. It places us in the camp of the scribes and Pharisees who simply wanted to put this woman to death by going about business as usual.

Except that in this instance, the people before us are not there because of a wrong they have committed. They are before us, those who have committed the wrong over centuries, asking for that injustice to end.

If we claim that we want to follow the example of Jesus, then we must acknowledge that he cared about the person who was hurting and standing in front of him… not about the favored political or religious position of his day.

Our black family, friends, and neighbors are standing in front of us. There are those who are trying to shame them in this moment under the guise of political and religious morality.

They are asking us to care.

One thought on “Dear Christians”